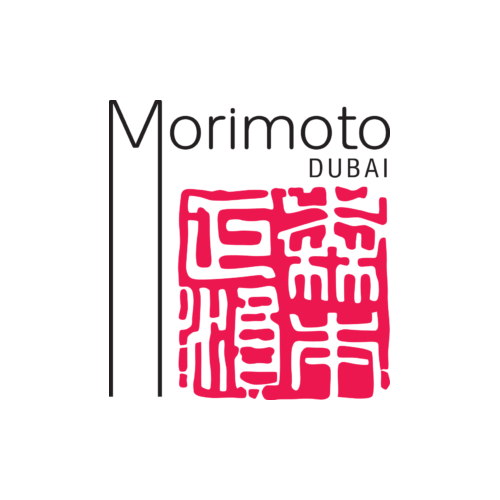 Chef Masaharu Morimoto has garnered both critical and popular acclaim across the world, not only for his fearsome reputation as one of TV's Iron Chef's alongside the likes of Bobby Flay and Wolfgang Puck, but for his seamless integration of Western and Japanese ingredients. Effectively he created a signature style for himself that bridges the culinary traditions of his native Japan and the American palate that he fell in love with as he travelled around the states in the 1980's.

The concept is different to many brunches, in that you are thrown in to the party as soon as you step out from the lift. What would usually be an irksome que to pay before you enter the upstairs lounge is made all-the-more palatable as you are offered pass around dishes (Chicken Katsu and a Seafood pancake stood out) by the waiters while you scan the vicinity for groups of well-dressed, early-thirty somethings sipping on pre-brunch cocktails, comparing leopard prints, or taking selfies out on the impressive burj-view balcony. 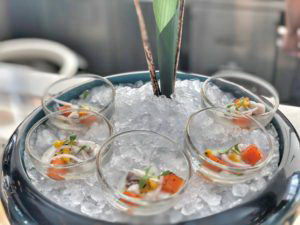 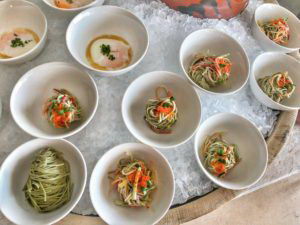 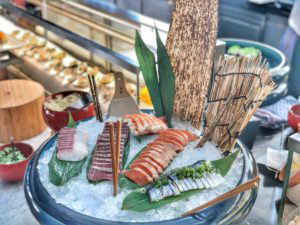 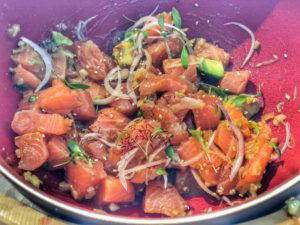 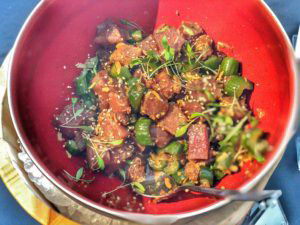 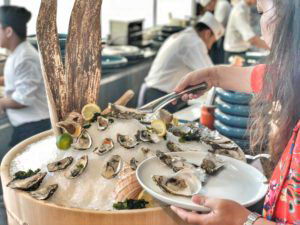 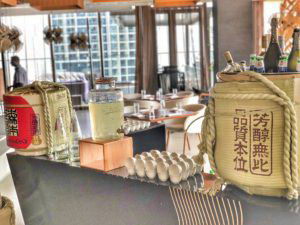 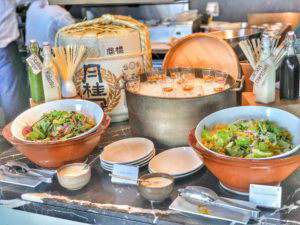 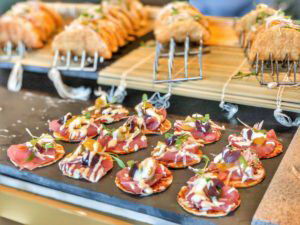 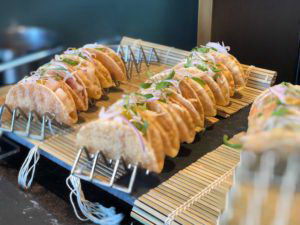 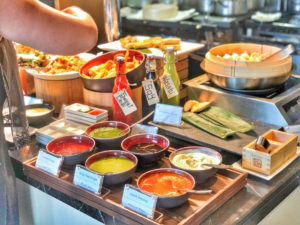 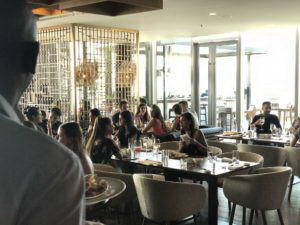 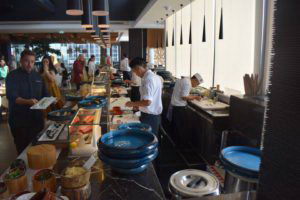 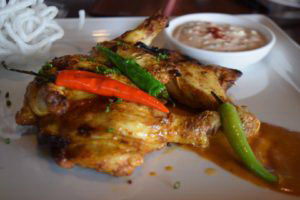 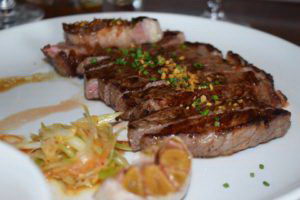 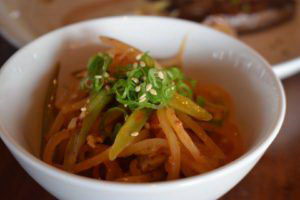 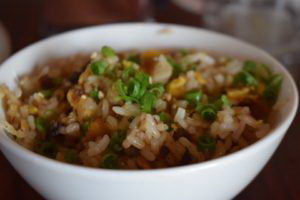 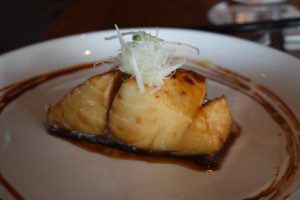 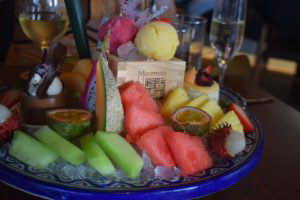 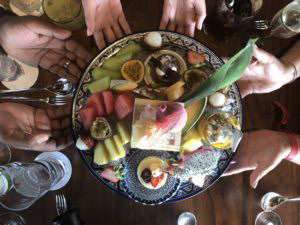 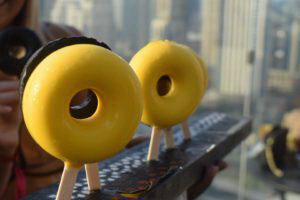 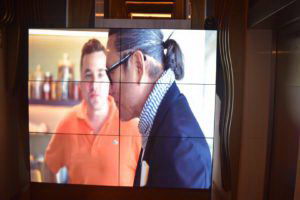 There are 3 Innocent drinks starring lychee, yuzu and mango which are affectionately prepared by the talented bar staff, although it was the adult menu where the signature cocktails, named after zodiac signs took our instant focus. The Inu (tequila, yuzu, agave, shiso & yakuri) and The Tori (scotch whisky, caramel, lemon juice, miso egg crisp) are partnered with 3 more traditional cocktails, the Bramble, the Mojito and the almighty Espresso Martini! Yay! and regular house spirits, along with white, red, rose and sparkling wines complete the lineup, along with the rather disappointing selection of Peroni beer, when any from a selection of either Kirin, Asahi, Singha, Tsingtao, Chang or Sapporo are all readily available in the UAE these days and would have been a much closer fit.

The contemporary Japanese menu infuses traditional far eastern dishes with Western ingredients and preparation techniques. We must say that the quality of the raw and cooked food preparation was of a very high standard accross the board. The chefs both behind and in front of the line all seemed to have a purpose, and could knock up a dish at a moments notice to suit our guest's individual dietary requirements.

What was more impressive was that for a brunch of only a few weeks old, there seemed to be a real affinity already developing with a group of loyal followers who were already on thier second or third visit, with a few overheard proudly exclaiming that this was the “go-to” party brunch of the moment. We shall wait and see before reserving such judgement ourselves, however the experience certainly left us tending to agree with the groundswell of opinion as to its credentials and potential.

Don't miss the sundowners out on the terrace with DJ Somalie providing the tunes and the beautiful backdrop doing the rest.

Diners are then asked to make their way down to be seated on the floor below, which you can see from the floor above while having your pre-drinks and where the meal is separated into both table side service, and an open kitchen and sushi bar which are both manned by an army of tireless chefs.

Part of Chef Morimoto's ever-changing selection of traditional and innovative raw fish preparations are imported from markets around the world, including the famed Tsukiji market in Tokyo and fans of raw fish will really be able to tell the difference from your "bog standard" variety with wagyu, whitefish and blue skin varieties. These traditionally fresh sushi, maki, oysters, sashimi, tuna and salmon poke bowls are on one side of the buffet, with the fusion dishes of tuna pizza, Morimoto taco's, and hot starters such as sweet potato and prawn tempura, Chicken Karagge, fresh miso soup and fried prawn Gyoza to name but a few, contrasted on the other. Even the dipping sauces kept in with the fusion theme, with ranch dressing opposite a fiery Kochujan mayo providing balance and contrast in perfect measure.

Entr&#233e's are brought to the table, including the Braised Black Cod with a ginger soy reduction, a dish we were keen to try ever since we found out that Morimoto had a stint as head chef at Nobu in New York, the brand where the dish is world-renowned. The Grilled Steak with signature sweet onion jus, and the Angry half chicken with roasted peppers. The chicken did have a slightly angry spiced kick to it, while the fish was a little too lucent for my own liking as I prefer my fish a little firmer, but did not seem to bother the rest of the table and it vanished within seconds. The steak on the other hand, with the addition of a little togarashi and sea salt, was cooked to perfection.

The chef's selection dessert platter is an impressive looking colourful bowl of dragon fruit, passion fruit, lychees, melon, pineapple, sorbets and a mini cheese cake all served on ice, and with imaginative yuzu flavoured ice cream donuts, were a perfectly light end to a delicious meal.

The Morimoto Brunch is every Friday from 12:30pm to 4pm

AED 350 with tea and soft drinks